Two unrelated events, Beth Doyle's Quick Pic: Before There Was Power Point post on Duke University Libraries' excellent Preservation Underground blog that reintroduced us to slide/tape shows. At about the same time there was also discussion of this technology on the the ARSC listserv (starting with http://listserv.loc.gov/cgi-bin/wa?A2=ind1208&L=arsclist&T=0&P=3491 , then scroll through the thread clicking the forth button from left at the top…), and cleaning up parts of our departmental reference collection here at Syracuse lead to the rediscovery of The Care and Handling of Books produced by Yale University Library with support from NEH in 1980.  I had the pleasure of helping mail out numerous copies of these while working at Yale ('91-'92) and remembered it well. 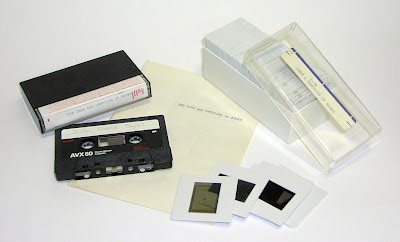 Long story short, the opportunity was too good to pass up. With the permission of Bobbi Pilette, Director of Preservation at Yale I had our audio engineer digitize the audio cassette (still in very good condition after all these years) including the pulses to advance the projector and had the slides digitized as well. The result is now available on YouTube in all its glory. Processing of images was minimal so the full retro effect is there. View direct at YouTube here.


The script is linked to in PDF form under "bullet 3" when one clicks on show more below the video at YouTube or direct here.

The presentation was prepared at the Yale University Library under a grant from the National Endowment for the Humanities by Anne Dutlinger, Peggy Madison, Jan Merrill-Oldham, Pamela Spitzmueller. Jane Greenfield and Gay Walker were project directors, .

While the fashions and hair are (still) vintage, the information is as relevant as ever and worth sharing more widely.

Don't mess with your bookie!

Carrying on the theme started by Audra of The Vespiary with Chris Ware's Great Book Trimming Machine...

From Le Petit Parisien June 19, 1910... The story reports that the bookbinder got behind on his payments to his bookie (note fingers already cut off) and did himself in. Whether he did it himself is debatable as the screw for the press bar in the guillotine seems higher up than he could reach, never mind operating the lever/wheel on what seems to be a manual device. Regardless, it is a cautionary tale that one should not betray a bookie.

Addendum: And thanks to David Amstell, here the text translated by Google from the French... A simple malfunction it seems, not a murder/suicide... I think I like Charlene's version better. Besides, what was his head doing clear through on the other side and where is the stuff he thought he was cutting??? The reader's comments ask these questions too... 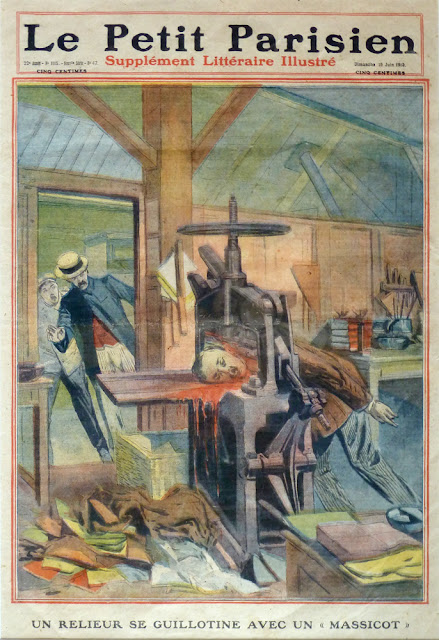 The image is from the collection of Charlene Matthews of Bindery in Hollywood, California.

Below the original description of the scene of the crime.Click link in caption to get to full sized image.

Posted by Peter D. Verheyen at 5:29 PM No comments: