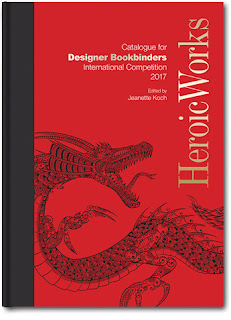 Heroic Works, Designers Bookbinders International Competition 2017 catalogue, was produced to accompany a travelling exhibition of the same title that first ran from July 18 through August 20, 2017, in Weston Library at the University of Oxford.  The exhibition could later be seen through September 28, 2017 at the Library of Birmingham, followed by a showing in London at St Bride Foundation until October 24, 2017, and then, in a final venue, at the North Bennet Street School in Boston, Massachusetts, November 3, 2017 through December 22, 2017. If you missed the show in the United Kingdom and will not be travelling to Boston to view the 28 prizewinners and a selection of American entries, do purchase this catalogue, which has completely captured the bookbindings exhibited in the four venues as well as all those entered in the competition.

The Designer Bookbinders and their impressive roster of supporters should be very proud of the ambitious travelling exhibition and catalogue. The catalogue, beginning with its cover, conveys excitement and motion through the dynamic dragon motif lunging toward the viewer. Played out against a rich red background highlighted by glittering gold-toned titling, it serves as a theatrical introduction to the international themed contents within.

Since not all bookbinders and other followers of the book arts will be able to see the exhibition in any of the venues, it is commendable that the catalogue begins with descriptions of the four hosting institutions. Instead of just listing the exhibition dates, this informative catalogue gives brief paragraphs about the locations and provides their contact addresses. Readers will note that three of the four venues recently underwent extensive renovations and, although not mentioned, the North Bennet Street School is in a newly acquired and renovated building. It is comforting to know that books and related crafts, and the buildings that house them, are well cared for on both sides of the Atlantic.

The competition judges, Harri Aaltonen, Sue Doggett, and Sophie Schneideman, must have had a challenging time selecting the 28 books for the Sir Paul Getty Bodleian Prizes. The catalogue is filled with some breathtakingly beautiful books, created with outstanding technical skills. This review will only highlight fourteen books, although there are many, many more worthy of attention. Bookbinders and bibliophiles need to see the catalogue for themselves and savor the styles that appeal to them. The bookbindings, made using multiple techniques and materials, with finely honed skills, and keenly developed design consciousness, reveal that members of Designer Bookbinders merit their international reputation.

This reviewer had the good fortune to see the exhibition at the Windgate Gallery in the North Bennet Street School (NBSS). This venue may have influenced the choice of several books discussed here. Full disclosure: I am an American, graduated from the Bookbinding Program at NBSS, was taught by Mark Esser, and have served as a NBSS overseer for some years. That being said, the binding by Mark Esser is mesmerizing, in part because of the boldly repetitive design.  It was courageous to undertake a regular and symmetrical pattern, since the eye tends to focus on any flaws or inconsistencies in this style. Mark, well known for his commitment to craftsmanship, has accomplished a work that stuns in its perfection.


All images of bindings © Designer Bookbinders. Photos by Greg Smolonski.


The gorgeously crafted, wooden-board book, designed by Fabrizio Bertolotti fit perfectly into the NBSS Windgate Gallery setting.  The school, with programs involving wooden structures, such as Cabinet & Furniture Making, Violin Making, Carpentry, and Piano Restoration, has an appreciative audience ready to admire the precise woodworking mastery that went into the making of Bertolotti’s Héraclès.


Priscilla Spitler’s cover, arrayed with brayer-printed leaves so vibrantly accenting the goatskin, was a delight to view on a bright New England day—the sky was filled with similar multi-hued leaves. One regrets that in an exhibition of bindings, interior features such as Spitler’s pochoir page illustrations cannot always be on display.


In contrast to the flamboyant covers of Esser and Spitler, the prize-winning bindings by Keiko Fujii and Gavin Dovey have subtle tones and ornaments.  Fujii’s book has a soothing appearance because of the soft hues; pale blue calf accented with white and cream-colored onlays and inlays. The continuous elliptical configurations of the decorative elements blend harmoniously with the curve-modeled boards.


Gavin Dovey has elegantly airbrushed the surface of the goatskin cover in a manner that brings to mind surface gilding. The tooled organic lines on the covers suggest veined butterfly wings, with the onlays and gold leaf resembling ocellus: considering the movement of the boards in relation to the spine, this also could imply the fluttering of wings.


The Windgate Gallery, as indicated above, featured the 28 prizewinners and a selection of American entries. The catalogue includes all the bindings entered in the competition. Photographer Greg Smolonski did a fine job imaging the books, so those seen in the catalogue are eye-catching, as well.
Architectural designs benefitted several bookbinders well in portraying the “heroic” on a grand scale. For instance, Sylwester Pacura illuminated his black Morocco binding of The Golden Legend with multi-colored leather onlays fashioning a glowing rose window, very pleasing in proportion.


Eliška Čabalová deftly sculpted and cut out the boards of her binding, creating the illusion of the gothic-windowed St. Vitus Cathedral, a fittingly dramatic symbol for Prague in Legends. The book seems to be an actual edifice, because Čabalová cleverly created the impression of shadows by uncovering the decorated flyleaves inside the cut out windows.


Elements from nature also figured in a number of bindings and helped to accentuate the timeless quality of “the heroic.” Alain Taral’s walnut wood binding, with its strong grain and burls, bears the gravity of an object that has survived centuries of trial and strife. The binder wisely chose to allow the wood alone to make a statement, the resulting cover embodying beauty, unadorned.


Dace Pāže adeptly attached Icelandic stones to metallic-toned leather covered boards so to suitably bind the Codex Regius. The placement and quantity, five stones on the upper and one on the lower board, combined with the size and sheen of the stones attractively symbolize Iceland.


Mythical beings from different cultures take formation on the book covers as well. Maria Ruzaykina used two striking creatures, a dragon and a human-faced bird, as metaphoric elements for her chosen title, Epic. The creatures, themselves lavishly tooled, are backlit by wonderfully gilt concentric circles.


Karol Wilczynska selected to show a cave painting design on the upper cover of The Boy and the Taniwha. The painting, of wheel-like and circular forms evoking Taniwha, the unseen being, stands out because of the blocks of contrasting color with which Wilczynska framed it.


The human heroes show-up in the cover designs, both in figurative examples as well as in subjects picked to represent them. Given the theme of this exhibition, not surprisingly, there are a plenty of lovely samples to touch upon; three such books are looked at here. Patricia Richmond took the opportunity to showcase her tooling skills by decorating her Folk Tales and Fairy Tales from India with nicely rendered images of people. The variety of tools used together with the abundance of gold add intensity to the visually complex cover.


Jamie Kamph employed hunting motifs to represent the actions of humans in the book Sir Gawain and the Green Knight. The black silhouette hound and boar shaped onlays laid in a diagonal line balance out the red axe and holly sprig onlays. The binder cunningly avoided the use of the color green to stand for the mysterious knight.


Ido Agassi focused on the chainmail traditionally worn by knights of old to embellish the cover of Don Quixote Visiting a Printing Shop, reminding viewers of Quixote’s vivid conviction to revive chivalry.  Tooling a circle more than 12,000 times on the cover mirrors Quixote’s multiple efforts in attempting to achieve his goal; heroic efforts on both the part of the binder and the protagonist!


Heroic Works, Designers Bookbinders International Competition 2017 catalogue provides a lasting record of the travelling exhibition by describing the venues, showing all the books entered in the competition, and by giving a contact list of the international group of bookbinders associated with their organization, highlighted by country. The foreword, preface, and introduction offer valuable background information and set the tone for the illustrations that follow. As Lori Sauer points out in her introduction, there remains a universal fascination with fine bindings, and people are collaborating on an international scale to preserve and foster the craft of bookbinding. Exhibitions, coupled with catalogues such as this, accentuate the effort exerted by groups like Designer Bookbinders, who heroically take on the herculean tasks of setting standards and acting as role models for the next generation of fine binders.


Barbara Adams Hebard was trained in bookbinding at the North Bennet Street School. She was Book Conservator at the Boston Athenaeum for 18 ½ years and became the Conservator of the John J. Burns Library at Boston College in 2009. Ms. Hebard writes book related articles and book reviews, gives talks and presentations, exhibits her bookbindings nationally and internationally, and teaches book history classes. She is a Fellow of IIC, a Professional Associate of AIC, a board member of the New England Conservation Association, and an Overseer of the North Bennet Street School.

Posted by Peter D. Verheyen at 7:00 PM No comments: