From Leipzig to London: The Life and Work of the Émigré Artist Hellmuth Weissenborn 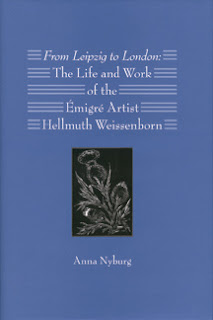 Anna Nyburg’s book, From Leipzig to London: The Life and Work of the Émigré Artist Hellmuth Weissenborn, was my first introduction to this early twentieth-century German artist and practitioner of the book arts. Nyburg, a lecturer in German at Imperial College London with a PhD in Exile Studies, explains that her book closely considers Weissenborn’s life as a whole, especially in the context of his time in exile. Weissenborn, who died in England in 1982, spent his first forty years in Germany before emigrating in 1938. He taught perspective and drawing at the Leipziger Akademie für Graphische Künste und Buchgewerbe, until he lost his job due to his wife being Jewish. Weissenborn had friends and supporters in England, including other German artist émigrés, but particularly the British writer Victor Bonham Carter. These connections proved instrumental in his ability to make a livelihood as an artist, illustrator, and publisher in his new country.

Nyburg takes the reader through a quick history of the book arts and publishing in Germany during the 1920s and early 1930s and the influx of émigrés in these fields to Britain during the mid-1930s onward. Many exiles brought skills and knowledge that contributed to the cultural life of Britain, and Weissenborn was one such artist. The reader learns of his life and work, with asides concerning other notable people in the art and publishing fields.

Growing up in Leipzig, a center of publishing and book production in the early decades of the 1900s, allowed for a young Weissenborn to learn by exposure to the rich cultural life in the city. His father taught at the Leipziger Academie, where Weissenborn studied, and where he later became a professor. Many practitioners of modern graphic arts were affiliated with this school during these years, including typographer Jan Tschichold.

Weissenborn’s artistic talents included typography, drawing, painting, and printmaking, such as woodcut, linoleum, and wood engraving. His drawing and art practice appears to have been an important part of his daily life, even during his service in World War I and in his six-month internment in 1940 as an enemy alien on the Isle of Man. When released, Weissenborn taught art and created illustrations and fine art. He and his first wife divorced, and he eventually began the Acorn Press with Lesley Macdonald, his second wife. The Acorn Press produced illustrated books, all with close attention to fine design, printing, and craft.

Within her narrative of Weissenborn’s life, Nyburg includes his early bookplate typography in relationship to early graphic arts and design, his art experiences in the war and internment camp, his work as a teacher, and his publishing ventures. Weissenborn used what he saw in his art: the landscape scenes in the villages through which he traveled, common objects from the routines of internment such as garbage cans and vegetables, and the bombed-out buildings in London. While his post-World War II artwork took on less dramatic subject matter, Nyburg tells of his war sketches as source material for the book illustrations in The Diary of Edward Thomas (Whittington Press) some sixty years later.

Weissenborn’s life in internment reveals his commitment to his art and craft and, as Nyburg states in her introduction, a man resourceful and adaptable. She explains how Weissenborn devised alternative materials and methods for creative expression. His printmaking involved using margarine and graphite as ink and floor covering as a printing block. The painted-over windows of his quarters became his canvas, with scratch marks revealing light and image.

Weissenborn’s teaching commenced again after his internment. Nyburg interviewed former students, and these lengthy quotes from those who knew him bring a welcome new perspective to the narrative. His excitement with the work was something he wanted his students to feel. Lola Quaife recalls, “He said, ‘Never draw unless you are excited by what you see.’” And it is a lesson she hasn’t forgotten. (p. 123) Weissenborn himself seemed to find excitement in both the remarkable and the quotidian, as his war and internment artwork demonstrates.

Nyburg portrays a man whose temperament seems to have contributed to his ability to deal with the challenging life circumstances he faced. She draws on what appears to be an extensive family archive, as well as interviews with family and friends, to do so. However, in her attempts to explain the complex nature of his personality, she includes quotations or information that complicates my understanding of him. These often occur in the examination of his familial relationships, such as with his second wife, Lesley. (p. 153). Nyburg tries to explain Weissenborn’s comments and personal feelings, but I am not sure how well this works in every instance. For example, in her discussion of his World War I journal, letters, and sketches, she compares his comments in these materials with the novel of the same war, All Quiet on the Western Front. While I appreciate her attempt to understand Weissenborn’s reaction to his war experiences, I think a comparison of a teenage soldier’s diary to a fictional story somewhat of a stretch. (p. 37) In such a short work, perhaps omitting some of these details or suppositions would have made for a clearer understanding of Weissenborn’s life, if not his character.

Despite these instances, I enjoyed this book and came away with knowledge of people and episodes in history I would like to further explore. Exposure to an artist’s work, life, and process can both inspire and teach. Contemporary practitioners of the book arts can benefit from knowledge of the historical figures in the field, even as they work in the modern practical aspects of the craft. Weissenborn lived through periods of difficult circumstances and great change, in society and technology. Whether a reader has an interest in the European book arts, or in an interesting life of the era, this book would be a good step into that world.

Stephanie Wolff is Assistant Conservator and Book Arts Instructor at the Dartmouth College Library. Her Master of Arts in Liberal Studies (MALS) degree from Dartmouth College focused on the book, including its historical, cultural, and artistic aspects. She shows her artist's books in exhibitions around the country.
Posted by Peter D. Verheyen at 9:39 AM No comments:

While 2013 is still no longer so very, very young I would like to introduce the Bind-O-Rama theme for this year...

These can be historic or contemporary, complex or simple, but should be exquisitely and creatively crafted to reveal the layers of the book. Examples can be seen in the University of Iowa Library's digital collection from the conservation lab, or see below for an example of a German-style springback.

Happy binding and look forward to your entries at the end of the summer OCTOBER 31.. Details and form will be out early summer real soon HERE.