InsideOUT, an exhibition of contemporary bindings of private press books 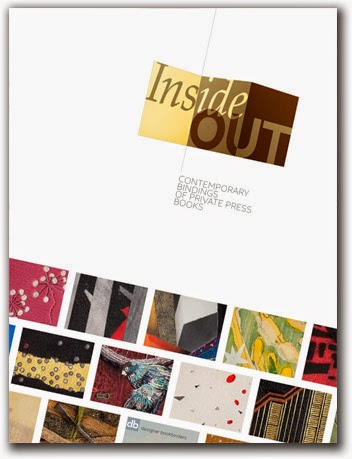 The recent exhibit InsideOUT, organized by Designer Bookbinders, showcases the work of 59 binders from the UK and the US each of whom completed a design binding of a text published by one of nine fine presses. The culminating works are an instance of eating one's cake and having it, too. These are one-of-a-kind pieces of art that illustrate the collaborative nature of the field of book art, with years of mastering one's craft on display on both the inside and outside of the book. Designer Bookbinders does a great service to the field as a whole in creating exhibitions like this one.

The 80pp full color catalog for the exhibition is expertly designed and organized, with images of the fine press texts acting as a subtle backdrop to the images of each binding. The bindings are artfully arranged on the white of the page, without a visual bounding box, only a slight shadow at the very bottom of the cover to indicate its three dimensionality. Detail shots of the books highlight a particular structural or design element. Bindings are grouped according to press, which allows for bindings of the same title to be shown alongside one another, giving the viewer insight into the quality of the writing and illustrations contained within, as well as the creative process of the binders.

A successful design binding should interpret the text to be bound in an original and visually compelling way while showing the style and technical skill of the individual binder. There are too many examples of successful design bindings in this catalog and exhibit to call out each one individually. However, there are a few here that directly illustrate the project of the exhibition and which display other characteristics that are of interest to me personally.

The three bindings for the Arion Press Journey Round My Room by Xavier de Maistre, are compelling in their similarity of interpretation, which speaks to the strength of the writing in conveying its message and to the publisher in communicating this message in its choice of layout, typeface, color, and accompanying imagery. The text, originally written in 1790, is an autobiographical account of a young officer imprisoned in a single room and who takes to describing in specific detail the voyages he takes in this confined space, both in body and mind. In the Arion edition, the text is accompanied by hazy photographs of objects in a room by architect Ross Anderson.

All three binders of this text—Annette Friedrich, Jo Bird, and Haein Song—chose to represent the work with abstract imagery. The colors on all three design bindings are very similar, in the rose and tan color range, communicating to the viewer that these hues must be referenced in the writing itself. Annette Friedrich's book is bound in a light tan goatskin with tooling of precise and subtle markings in a variety of pigmented and metallic foils. The scale, color, and placement of the delicate dots, dashes, crosses, and arcs seem both improvisational and studied, representing the physical and mental wanderings of the main character. The outer bounds of the book cover smartly act as the visual boundaries of the room. Haein Song's binding is comparable in design using tan goatskin and similar markings, yet instead of tooling, these markings are thinly pared, irregularly shaped, feathered pieces of off-white leather onlay. They read as ghosts of footsteps in a room, yet are described as being reflections of light. The subtle shift in scale from foreground to background of these pieces creates a sense of depth, which is pleasing to the eye. Jo Bird's binding is covered with a series of small, carbon-tooled, irregular spirals arranged in a grid to illustrate the confined yet varying path of the main character about the room. In all three of these bindings, the bookbinder truly responded to the text and created a work that adds to the perception of a reader/viewer.

Stephen Conway created two bindings for the texts of different presses. These bindings both used simple yet bold design elements and the inherent beauty of the covering materials to great effect. The design for Steel Horizon, a collection of poems by Jonathan Wonham about his time on a North Sea oil rig, published by Incline Press, is a checkerboard grid of panels alternating in dark grey goatskin and figured vellum. While a viewer may expect to see a binding with a long horizontal line as a design element for any text that contains the word “horizon”, Conway goes one step further, evoking an ominous feeling appropriate to the poems contained within. The dark grey goatskin panels are arranged to create a sense of enclosure as both horizontal and vertical lines visually lock into one another creating a cross, cross-hair, compass, bars, a window. He reinforces this effect by tooling horizontal and vertical lines in silver onto the goatskin panels. The mottled off-white vellum panels read like a leaden sky as they alternate with the dark grey. The corners of the panels are riveted into place, an industrial element that creates another subtle visual cue giving the reader/viewer a very real sense of place.

His other binding for Britten's Aldeburgh, published by Whittington Press, uses the same design elements of goat skin panels and figured vellum. The figured vellum is the off-white backdrop to a series of horizontal rectangular black goatskin onlays, stretching across the spine from back to front cover. The horizontal panels are tooled with gold horizontal lines. Conway uses visual repetition to great effect as the black and gold lines repeat down the cover from head to tail, calling to mind waves or a somewhat bleak landscape that is seen again and again. These lines also reference musical notation and the work of the composer Benjamin Britten, on whose walks around the Suffolk coastline this book is based. The natural isolated areas of darker pigmentation on the figured vellum are used expertly on the front and back covers at the very edges of the boards, again evoking the sky and gathering clouds. Conway has a very strong individual style and his technical skill is impeccable, but he does not allow his visual sensibility to overshadow the text—he honors it with his interpretation.

Two exuberant bindings by Hannah Brown and Nicky Oliver show a less formal approach to design binding, yet are both successful. Embroidery on bindings dates back many centuries and lends a warmth and intimacy to books that is evident in Brown's work. In her design binding for the Bicycle Diaries, published by Midnight Paper Sales, the viewer is invited to look down on a city sidewalk scene of pigeons and a bicycle. This pictorial rendering has a three dimensional, hyperreal quality that completely transforms the materials she is working with. The three dimensionality is enhanced by a wash of acrylic paint used underneath the embroidery. The text is about the author Richard Goodman's journey through New York City on the day of September 11th.


Hannah Brown's interpretation of the text places us there with the author, unable to look at the most common city scene in quite the same way ever again. Nicky Oliver uses a painterly, unconventional approach to design binding. Her binding for Lost and Found published by Whittington Press is an expressive burst of color, line, and motion. She has a distinct style that shows layers and layers of work with leather dyes and decorative tooling. Her dynamic use of the entire cover as her canvas creates a visually compelling composition that draws the viewer in.


Another binding of note is Donald Glaister's interpretation of Circus by Shanty Bay Press. His masterful technique combines a number of traditional and non-traditional materials to illustrate the larger-than-life experience of the circus. The tent on the cover appears to bust open and overtake the binding, partially covering the exquisitely tooled title on the spine of the book. His work shows humor, skill, and an artful engagement with the conventions of design binding.

All of the other bindings not mentioned here are worthy of their own examination and I only wish time and space allowed for me to write about them. I am honored to take this tour through the exhibition, courtesy of the fantastic accompanying catalog. I highly recommend this catalog to anyone interested in design binding.

The Exhibition was on display in the Layton Room Gallery at St Bride Foundation, London, 15 May to 22 August 2014.

Venues in the United States are:

For more information and to order a catalog visit Designer Bookbinders' website.


Amy Borezo Amy is an artist, bookbinder, and the proprietor of Shelter Bookworks,  a bookbinding studio in Western Massachusetts.
Posted by Peter D. Verheyen at 9:24 AM 10 comments: