Below the entry form for the 2012 Bind-O-Rama (not to be confused with the Bonefolder Bind-O-Rama, but yet a continuation of the tradition).
The Book Arts Web annual online exhibition on
The Bone Folder, by Ernst Collin

We are pleased to present The Bone Folder, by Ernst Collin as the 2012 Book Arts Web Bind-O-Rama. This year's event will be a set book affair with participants being asked to bind the same text. 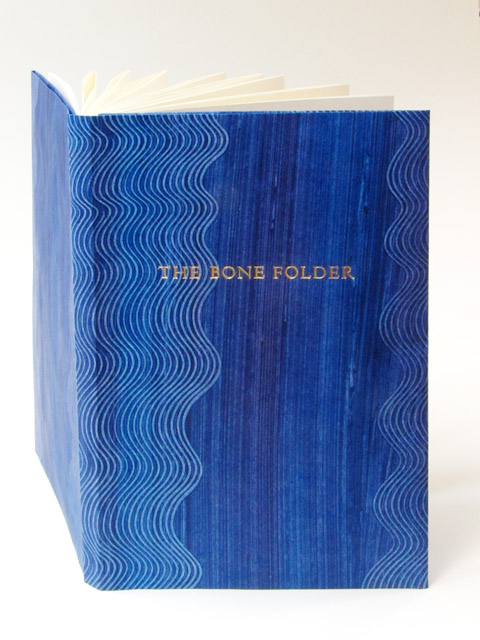 Translated by Peter D. Verheyen as The Bone Folder, Der Pressbengel (1922), is Collin’s best-known work, and first republished in 1984 by the Mandragora Verlag and later translated into Italian as Dal Religatore d’Arte (1996). Conceived as a dialogue between a bibliophile and a master bookbinder on all aspects of the bookbinding craft as well as specific techniques, the original German has a charming if somewhat pedantically formal “school primer” tone, in keeping with the time in which it was written. The question-and-answer format has long history in pedagogical texts, whether for religious catechisms or trades, as in Friedrich Friese’s Ceremoniel der Buchbinder (1712), which introduces the reader to all aspects of the bookbinding trade and its traditions.

Throughout the work, Collin himself is very frank in addressing the conflicts between quality and cost, as well as the positive and negative impacts of “machines” throughout the work. In his introduction to the 1984 reprint of Der Pressbengel, Gustav Moessner, author of and contributor to several German bookbinding texts, states that he sees the Collin’s work in part as a reaction to the growing industrialization of the bookbinding trade and the loss of the skills and techniques connected with this industrialization. In many respects this trajectory continues today, accelerated by the decrease in formal bookbinding apprenticeship opportunities, the increasing simplification of structures, changing aesthetics, and ultimately changes in the perceived value of books and the general economic climate of Weimar Germany.

The text can be downloaded in PDF form, laid out in 7 signatures of 8 pages (sample pages below) each from the Pressbengel Project from the left menu on that page. Bindings can reflect the typical German trade and fine binding styles described in the text, those of other national traditions, or innovative interpretations of these traditional styles. Tutorials to structures in the German tradition can be found here.

More information and page samples can be found here.
Posted by Peter D. Verheyen at 11:30 AM No comments: