Limp Bindings from the Vatican Library 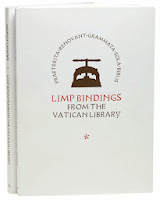 Monica Langwe’s most recent book is a more extensive follow-up to her previous work on limp bindings from the City Archives in Tallinn, Estonia (see Langwe, 2008). In Limp Bindings from the Vatican Library, the author cleaves to the same format, providing descriptions and diagrams for 11 historical bindings and includes a gallery of 11 contemporary works from international book artists. The Vatican Library is not the easiest institution to access, and from the author’s long list of acknowledgements, it is clear that a great deal of planning and coordination was required to make this project happen. With equal parts history, manual, and exhibit catalog, this volume is a delight to read and would be a welcome addition to any binder or bibliophile’s collection.

The book itself is beautifully designed, with clearly printed graphics and a typeface inspired by early Italian printing. The textblock is composed of 5 folded sections, sewn through the fold, with adhesive applied to the spine. The cover is a simple paper wrapper folded over the outermost leaves like a dust jacket. The construction is sturdy enough for extensive use and easily taken apart – a fact that binders wishing to respond to the text by rebinding the book itself will appreciate. The wrapper is printed on both sides and features labeled maps of Vatican City and the library. I found the maps most helpful, as Langwe includes a great deal of description of how the physical spaces that the library inhabits have changed over the years.

The text begins with a brief history of the collection. As one of the oldest libraries in the world, the Vatican’s collection has been through a great many changes; however, Langwe does not overwhelm the reader with dry facts. Organized by century, the history charts the evolution of the institution from the dispersal of the collection with the Avignon Papacy in the fourteenth century, all the way to the adoption of an electronic card catalog and building renovations in the twenty-first. Over the years, the library has grown by leaps and bounds through the acquisition of collections of note. Langwe provides a lists of the high spots, such as the Palatine Library of Heidelberg and the collection of the Barberini Family. Other institutions within the Holy See have been spun off of the library’s collection over time, including the Vatican Secret Archive, the Numismatic Cabinet, and the Museo Sacro.

Langwe follows with a discussion of the maturation of the conservation department within the institution. I was surprised to learn that a bookbinder has been employed by the library since 1475 and documentation of book repairs performed goes back to the late sixteenth century. The author describes several large rebinding projects that were undertaken in the past. One must assume that a number of original parchment bindings were lost in these efforts, however, we are lucky that the objects depicted in this volume survive. Today the conservation department is staffed by professionally trained conservators, who recognize the challenges of preserving the artefactual value of an object while maintaining its functionality.

Turning to the historical bindings, Langwe notes that they were meant to be functional and sometimes temporary; a means of organizing information, often with the ability to add or remove parts easily. With the popularity of limp parchment structures in modern book art and conservation practice (see for example Clarkson, 2005; Espinoza, 1993; Lindsay, 1991), it is easy for the contemporary binder to fall into the habit of thinking of limp parchment bindings in only one or two forms: text-to-cover attachment through primary sewing, such as a “long-stitch” structure, or sewn on primary sewing supports that are laced through the cover. Langwe reminds us, however, that these bindings have “infinite possible variations of materials, methods, and structure” (p. 27) and indicates that the goal of her book is to inspire the modern binder with the simplicity of these techniques from antiquity.

Nine bindings in parchment and two in paper are depicted in photographs and described with diagrams and text. Each volume includes different methods of textblock construction and cover-to-text attachment. A three-quarter view photograph of the object is followed by the title and a brief description of the item’s composition and dimensions. Clear diagrams of the textblock and cover construction appear for each structure. For volumes with more complex sewing or ticketing, step-by-step instructions appear alongside diagrams with arrows to indicate sewing or lacing patterns. Although the language assumes that one has experience with the most basic elements of bookbinding, even the novice could use this book to construct accurate models of each structure.

Each of the historical objects is mirrored by a contemporary binding from a list of 11 well-known and talented artists. A photograph of the binding appears alongside the name of the binder, the title of the work, and the title of the historical object that it represents. A brief statement from the artist and a list of materials also appear. I very much enjoyed flipping back and forth between historical and contemporary objects to see which aspects of each binding the artist chose to capture.

Szirmai (2000) in his seminal work, The Archaeology of Medieval Bookbinding, acknowledges that “studies of binding structures in archives are very scarce” (p. 287). Langwe’s work is a welcome answer to that call. In recent years, libraries and archives have begun to devote significant resources to digitization of content, but all too often binding structure and composition are ignored. Langwe acknowledges the difficulty in identifying bindings with common structures; however, documentation of bindings through photographs and diagrams, as presented in this book, can be an invaluable resource for contemporary binders, artists, and scholars. I applaud her work and look forward to future publications of this quality.

Henry Hébert is the Rare Book Conservator at the University of Illinois at Urbana-Champaign. He holds a MLIS from the University of North Carolina at Chapel Hill and a certificate in hand bookbinding from the North Bennet Street School in Boston, MA. Henry is currently serving as the Communications Chair for the Guild of Book Workers. More information and images of his work can be found at http://www.henryhebert.net.
Posted by Peter D. Verheyen at 8:01 PM No comments: