This review first appeared in The Bonefolder, Volume 7, 2011. 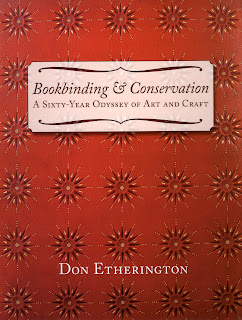 For those involved with bookbinding and  conservation, Don Etherington has been one of the leaders of those fields, and one who needs no introduction. For several generations of practitioners, he has served as a teacher, mentor, and friend. We have heard him speak at conferences, taken workshops with him, and enjoyed his company. Now, with Bookbinding & Conservation: A Sixty-year Odyssey of  Art and Craft we can read in his own words about his origins, how he came to enter this field and how he was influenced by his teachers and mentors as well as how he helped shape the world of bookbinding and conservation.

Bookbinding & Conservation: A Sixty-year Odyssey of  Art and Craft contains a forward by Bernard Middleton –  another leader of the field, and one who needs little introduction himself – and is divided into the 5 main “sections” of his life: the first 30 years, Florence, Library of Congress, Ransom Center at the University of Texas, and Greensboro.  The book concludes with extensive “gallery” of Etherington’s bindings over the years. .

“The First 30 Years” introduces us to Etherington’s childhood in WW II London during the Blitz, his other interests, and his career path. Like most bookbinders of his generation (and until the late 1970’s) his experience was that of leaving school at what is now considered an early age to learn a trade, subsequent “journeyman” years, and then striking out to blaze his own path. In contrast to most, however, his influences are a veritable “who’s who” of the bookbinding and conservation fields – Edgar Mansfield, Ivor Robinson, Howard Nixon, Roger Powell, Peter Waters – all critical thinkers and exemplars of the art and craft of bookbinding and (what came to be) conservation, it is easy to see how these experiences contributed to his professional growth and helped him follow their example of leadership in the field and mentoring of future generations.

In 1966 he left the UK for the first time on what would be a transformative journey – contributing to the salvage efforts in Florence at the invitation of Peter Waters – and beginning the transition from bookbinder to conservator. Just as this event was transformative for Etherington, so it was for the conservation profession as a whole. The sheer magnitude of the flood and the unprecedented response of conservators throughout the world created a melting pot of ideas on how best to respond. But, these ideas also created challenges and conflicts. Among them was the difference in approach between the apprentice-trained British Library conservators (such as Etherington, Clarkson, and Cains) and those more in the arts & crafts tradition such as Powell and Waters. According to Etherington, some of this was result of the renaissance and (re)development of structures such as the limp vellum binding, a structure that was observed to have withstood the floods better.  Other challenges revolved around language (bi-lingual “specification” cards were developed that included pictograms) training, and organizational issue, the latter two lead to the gradual decline of the center that was established by the British team lead in the end by Cains. The strict division of labor by specialization meant that few of the staff had fully rounded training, leading to increasing retention problems. Added to this were territorial and funding issues with the Italian government, all leading to a smaller book conservation program, and a situation not all that different from that faced by conservation and preservation programs here in the US and elsewhere. Ultimately, Etherington reiterates that this large-scale international response laid the foundations for a new, more analytical, approach to conservation and greater dialog across boundaries and disciplines – something that had not happened before.

In 1970, again at the invitation of Waters, Etherington came to the US to become the Training Officer in the “Restoration Department” of Library of Congress. Here he was also reunited with the third “Musketeer,” Christopher Clarkson. With practices greatly informed by the experiences of Florence, they set about to modernize and professionalize the program at the Library and to transform the profession. Among the things introduced was a manual dexterity test for new hires, phase boxing (developed from cigarette cartons – an outgrowth of a printing student design exercise), shelving by size, and the polyester encapsulation (a replacement for the damaging lamination process then in full swing). Etherington also describes in detail his work with Matt Roberts to develop Bookbinding and the Conservation of Book, one the most comprehensive reference works for binders and conservators. Also recounted is an early 1970’s “grand tour” of leading European conservation labs that helped inform developments at the Library. As if Florence were not enough, he goes on to describe other significant library disasters since then including the fires at the library of the USSR Academy of Sciences in Leningrad and the Los Angeles Public Library, as well as the earthquakes in California. While not as dramatic, but perhaps more significant on the larger stage, we also learn of the how conservation staff built a false book case for the Nixon Whitehouse (presumably to hide a recording device) that was never installed, but also “reconstructed” shredded documents that would later reappear at the Watergate hearings. Towards the end of his time at the Library, Etherington became involved with the Guild of Book Workers when he was part of a group asked to develop a certification program, something that was voted down. Lack of training opportunities, something identified as an impediment to a certification program however led to the creation of the Standards of Excellence seminars and provided high quality professional development opportunities and training for growing number of Guild members and leading to great improvements in the field.

1980 found him drawn to the new challenge of establishing a conservation program at Harry Ransom Humanities Research Center in Austin, TX where he would remain until 1987. With the full backing of the Center’s administration (Etherington was also Assistant Director), he was for the first time able to create his “ideal” lab set-up, informed by his experiences in Florence and at LoC. Among the details are a separate dirty room for paring, recesses for nipping presses, and a separate area for finishing with better airflow control that prevented the gold leaf from floating away. The lab even included separate rooms for exhibitions preparations, a paper lab, and even a dedicated exhibitions space to illustrate conservation activities. A rare privilege was that of selecting one’s own staff with no incumbents, some of whom are still there and leading the program. An Institute for Fine Binding and Conservation was also established featuring such instructors as Tony Cains and James Brockman. As with his other positions, Etherington was privileged to work on some unique projects, highpoints of this period being the conservation of a 1297 copy of the Magna Carta, including some tape on the back, and the Texas Declaration of Independence.

1987 was the beginning of other significant changes in Etherington’s life seeing him attend a workshop for renowned fine binders hosted by Hugo Peller in Finland. It was that there that he met Monique Lallier, and their stories became intertwined. Around the same time he was invited to establish a for-profit conservation center with ICI, a large library binder, who saw an opportunity for conservation centers able to handle the large-scale projects that research libraries needed. ICI would become the Etherington Conservation Center when he bought it, and then become part of the HF Group that had acquired ICI when he sold it back again. While the “bread and butter” work consisted of encapsulation, deacidification, and binding repairs, there was also a fair share of prestige projects such as the conservation and preparation for exhibition of the Constitution of Puerto Rico and the Virginia Bill of Rights – all of which make for interesting reading.  Throughout this last text section are Etherington’s recollections of his development of the use of Japanese paper for binding repairs, something that has changed the landscape of conservation treatment like few others by providing for a more efficient, structurally sound, less invasive, and aesthetically pleasing treatment option for not just the cloth bindings that make up many historical collections, but also leather and vellum. Etherington mentions with pride how these techniques have been built upon and further adapted by conservators everywhere. Also mentioned are activities with the Guild of Book Workers events, Bookbinding 2000, the American Academy of Bookbinding, and winning the first Helen DeGolyer Triennial Competition hosted by the Bridwell Library at Southern Methodist University in Dallas. His binding on The Book of Common Prayer is depicted in the appendix of design bindings, the last section of the book. A total of 52 of his design bindings are depicted and this section alone would justify acquiring the book.

While reading this book, I felt as if I was in the room with Don as he was speaking to those assembled about his life and work at the many conferences and workshops he attended. While many of the events described will be familiar to those who have been fortunate to know Don Etherington, they are told in refreshing ways so that we do not tire of hearing them again. The style is informal and draws the reader in to learn about bookbinding and the development of the conservation and preservation fields during his lifetime, but also about many of the more personal moments in his life and his great joy of life. What is revealed is the life of a man who at the right place and time and seized upon the opportunities presented to him to better himself and his chosen field. Just has he was fortunate in those that taught and mentored him, so has he touched so many practitioners both nascent and seasoned throughout the world, but in particularly here in the US. A bon vivant of tremendous generosity, Don Etherington while “slowly unwinding in the twilight of a long and rewarding career” still continues to push forward when most others would be looking back. We are all the better for it.  At the same time we should all look to his example of proactively seizing opportunities to develop ourselves and in how we conduct ourselves as professionals, especially in light of some of the dramatic changes the field of book and library conservation has seen – not all for the good.

On a more personal note, Don Etherington spoke about his life (and from this then unpublished autobiography) in a lecture for the Brodsky Series at Syracuse University Library that I was hosting. Reading about his life and reliving the lecture online* illustrated again the impact that he has made on the field and the lives of those in it. Thank you, Don.


Peter D. Verheyen served a formal apprenticeship at the Buchbinderei Klein in Gelsenkirchen, Germany; internships at the Germanisches Nationalmusum in Nuremberg, Germany, and at the Folger Shakespeare Library with Frank Mowery; worked with Heinke Pensky-Adam and William Minter, and at the Yale and Cornell university libraries. Currently head of Preservation and Conservation at Syracuse University Library. Past Exhibitions and Publicity Chair for the Guild of Book Workers, publisher of The Bonefolder, Book Arts Web, and Book_Arts-L. All are at http://www.philobiblon.com.
Posted by Peter D. Verheyen at 10:55 AM No comments: