The Journal of Dora Damage

[In light of recent conversations on Book_Arts-L about anthropodermic bibliopegy a sneak-peak at a review to be published in the upcoming issue of The Bonefolder – in production now. To read the thread, click on the link and the "view by topic..." ] 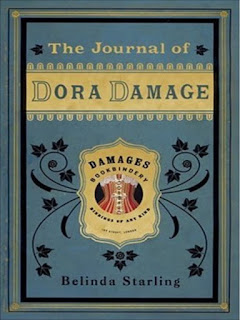 A chance meeting with an English woman over dinner on a remote Scottish isle last summer led to the mention of her friend Belinda Starling, recently deceased, who was the author of a novel that, as a bookbinder, she was sure I’d find interesting. No other details were shared, but a week after she left the island a parcel arrived via the Royal Mail containing the paperback version of The Journal of Dora Damage. The several blurbs on the back cover included one from the French women’s magazine Marie Claire (“a riveting tale of bookbinding and Victorian pornography”) and another from The Guardian which proclaimed the book a “scrupulously researched racy tale”.

I immediately began reading it and was transported into the Lambeth district of London in the mid-19th century with all its bleakness, despair and poverty – a very Dickensian setting whose sights, smells and tastes Starling expertly captured. The story’s narrator is twenty-something Dora Damage, a binder’s daughter, then binder’s wife, who sets out to support her severely arthritic husband Peter and their epileptic young daughter Lucinda by taking over the family business at a time when women were seldom permitted to perform other than menial bindery tasks (=sewing). Her options are few – make an attempt at successfully running the bindery or debtors’ prison for the entire family. So with her husband’s verbal guidance and the forwarding assistance of his young apprentice she sets out to resurrect Damages Bindery under the disapproving gaze of her neighbors.

Salvation appears in the form of Sir Jocelyn Knightly, an Africa explorer, physician, bibliophile and exoticist. Attracted by her unusual tooling and choice of cover materials, Knightly and his group of friends, the Noble Savages, likely modeled after Sir Richard Burton and his Kama Shastra Society, begin to provide commissions – along with morphine for Peter, an experimental therapy for Lucinda, and for Dora, entry into an unimagined netherworld of Victorian smut. Courtesy of Lady Knightly, Dora is also sent Din, a freed slave from Virginia, to become her apprentice (and she his!) after Peter dies.

The novel plunges deeper and deeper into the realms of vice, racism and pornography while providing what seem to be accurate details of the day-to-day operation of her bindery and the local tanneries. Dora finally draws the line at the degree of depravity to which she is willing to close her eyes. (For me the line would have been drawn sooner –some of the material in this book, based on well-researched Victorian predilections, is strong stuff.) With all the information she has, however, and the police closing in on their ‘business’, the Savages declare her expendable, and as a fitting termination to their relationship kidnap her and tattoo their logo onto her buttocks, planning to eventually use her skin (vegetable-tanned, we assume) on yet another one of their nefarious volumes. (“The perfect quarto, you said? Mrs. Damage’s arse, I’m afraid, will cover little more than an octavo, and a crown octavo at that.”)

Good finally prevails, as it usually does in these Victorian novels – and their Masterpiece Theatre versions. Dora, Lucinda (now free of epilepsy), and Mrs. Knightly and her newborn half-black son move off to Gravesend as a family. Dora then uses some of newly-acquired wealth to create a support organization for women binders that by 1917 evolves into the Society of Women in the Bookbinding and Printing Trades.

In recent years I’ve seldom devoured a book as voraciously as I did this one. Its depiction of Victorian bindery life, together with its intrigue and malignant darkness – overshadowed by the fortitude of Dora herself – lead me not only to recommend it strongly but to also suggest that it might make an ideal (if somewhat unusual) ‘set book’ for a binding competition.


John Nove is a bookbinder working for private and institutional clients in western Massachusetts. He graduated from the North Bennet Street School and opened the Grey Seal Bindery, named to honor the selkies he hears singing from his summer cottage on the Scottish island of Papa Westray in Orkney. He can be reached at <nove.john@gmail.com>.
Posted by Peter D. Verheyen at 10:15 AM No comments:


(From The Parent’s and Guardian’s Directory, and The Youth’s Guide in the Choice of a Profession or Trade by Joseph Collyer, Esq.,  London, 1761)

Discovered and submitted to The Bonefolder by John Nove.

The boy intended to be a calves leather binder, ought to be both strong and pretty ingenious in order to become perfect master of the several branches of the art of binding books in calf. But no extraordinary education is necessary; reading, writing, and a little arithmetic being sufﬁcient. This trade requires strength to beat the sheets smooth with a heavy hammer, and ingenuity in gilding and neatly lettering the back, as well as in beautifully marbling the edges of the leaves; but this last is part of the art known to few of the trade, and those make an extraordinary advantage of it.

The vellum binder is chieﬂy employed in binding shop books in vellum or parchment; he also rules paper for the account-books. His is the most proﬁtable branch of binding both for the master and journeyman.

The binder in sheep is chieﬂy employed in binding of school books, and little books in gilt paper for children and requires no genius.

The calves leather binder may set up a master with about 50 l. and his journeymen have seldom more than 12 s. a week, except they are very curious and uncommon hands, and are employed by a master distinguished by the neatness of his work. The vellum binder may become master with even less money; or get 15 or 18 s.a week working as a journeyman. The sheep binder may begin trade for himself with about 30 l. but the journeyman can can seldom earn more than 10 s. a week. All these branches take about 10 l. with an apprentice.


John Nove is a bookbinder working for private and institutional clients in western Massachusetts. He graduated from the North Bennet Street School and opened the Grey Seal Bindery, named to honor the selkies he hears singing from his summer cottage on the Scottish island of Papa Westray in Orkney. He can be reached at <nove.john@gmail.com>.
Posted by Peter D. Verheyen at 9:18 AM No comments: