Playing with Pop-ups: The Art of Dimensional, Moving Paper Designs 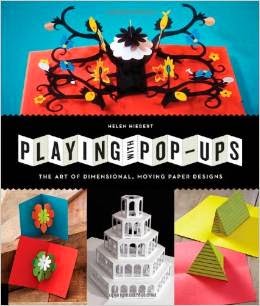 I love pop-up books. I collect pop-up books:  my family still gives them to me as birthday and holiday presents, even though I am a grown adult. I work in a library with a substantial collection of pop-up books, and I am quick to tell anyone who will listen that I have gotten to hold and play with an original Meggendorfer pop-up book. Therefore, I wasn’t surprised when I was asked to review Helen Hiebert’s new book, Playing With Pop-Ups. A passing observer would probably remark that I was “elated” at the prospect of doing such a review.

Teaching the art of the pop-up is difficult, just like any how-to book about bookbinding, because it challenges the author to describe 3-D concepts in a 2-D format. Many pop-up structures function with a front-end and a back-end structure, just like a website: the viewer almost always only sees the front-end result, and the back-end support is not very apparent except to the experienced reader. I’ve looked at many a damaged pop-up book and wondered, “How on EARTH did they make this?” while trying to fit two parts of a broken whole back together unsuccessfully.  Helen Hiebert’s approach to this essential problem with teaching these complicated structures is a combination of providing templates to practice on, and a wealth of concisely illustrated instructions. 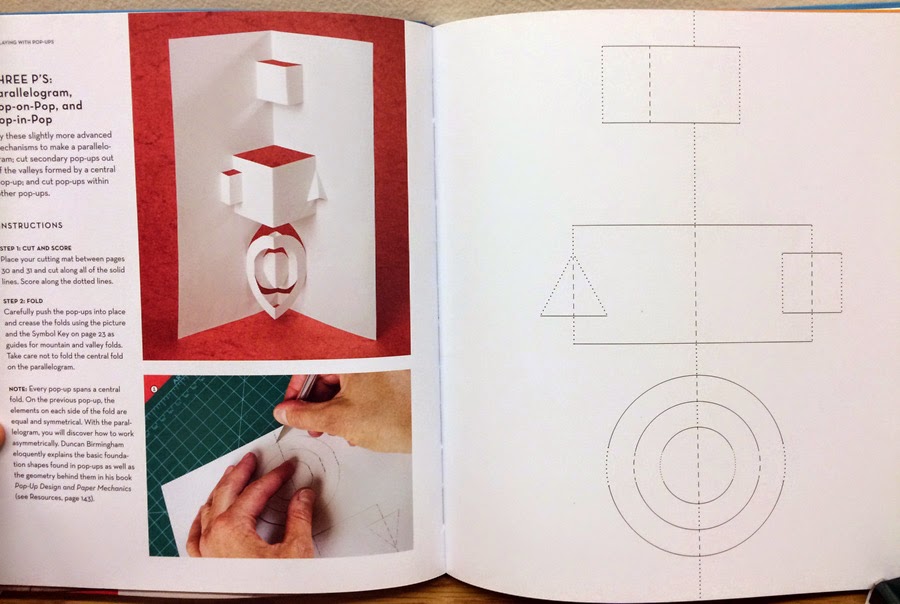 The book begins with a very brief history of pop-ups, a commentary on the state of pop-up arts today, an interesting glimpse into the production of a commercially published pop-up book, and overview of the basic pop-up terminology, tools, and tricks of the trade. I particularly enjoyed the description of the production line process of a commercially published pop-up, myself. Each different kind of fold and cut used in the following project instructions was clearly illustrated with a nice photograph and a well-written description. Hiebert also provides a list of recommended tools, as well as alternatives for some tools – like using a paperclip or the back of a knife instead of a bone folder to fold or score paper. This is a nice touch that makes the craft more accessible and promotes the kind of “creative reuse” so endemic to bookbinding. 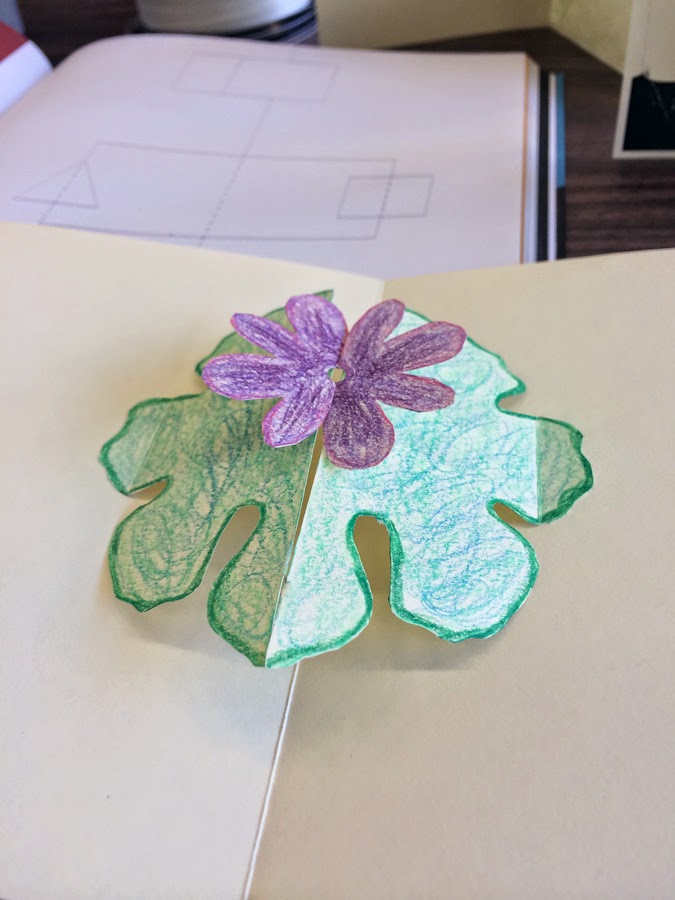 However, in my opinion, the real genius of Hiebert’s book is the templates she provides for each project. These are pages in the book that are meant to be photocopied onto the paper of your choice, and then you just follow the dotted, dashed, and solid lines with bonefolder, knife, and glue, to create the pop-up. The first three projects are termed “Pop-up Warm-ups,” and are meant to familiarize the budding paper-engineer with the basic tenants of pop-up structure. The projects that follow increase in difficulty, but provide a nicely diverse range of different types of structures and themes.  These include a pop-up city skyline, a Valentine’s card, paper earrings, a tunnel book, and a volvelle with six slots. Our conservation lab intern and I spent a happy afternoon completing one of the projects using the templates. It’s really a no-brainer way of teaching the structure, as it removes the risk of beginner mistakes such as mis-measuring; each part of the template is clearly labeled with different lines for cuts, mountain folds, or valley folds. The other wonderful thing about the templates is that many of them are blank or simple enough that you could easily customize them or slightly modify them to create an original work. In my opinion, the templates get the point across very effectively and leave very little confusion about how they should work. 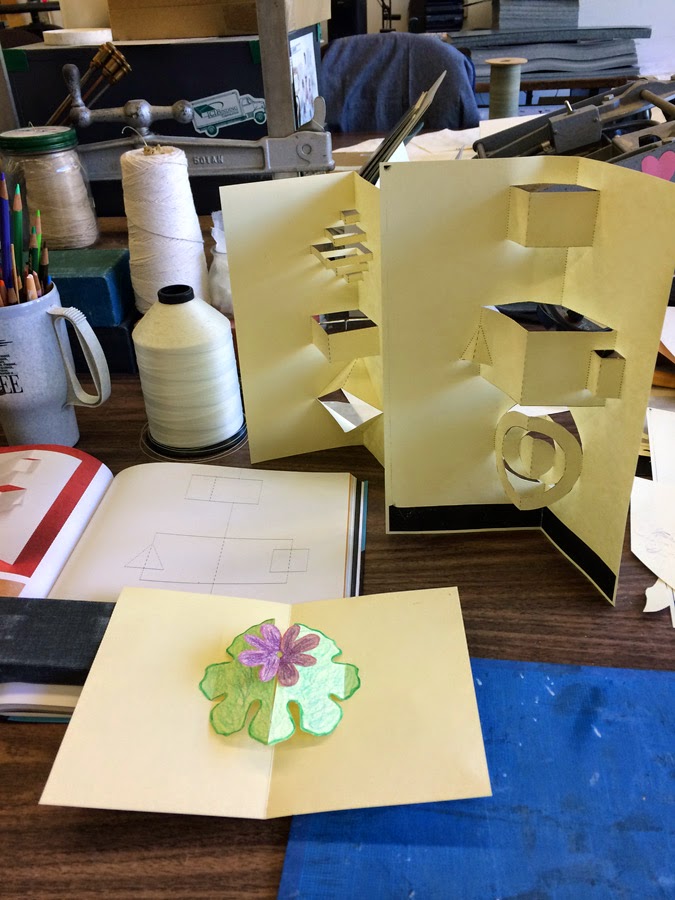 The final section of the book is devoted to a beautifully photographed gallery of current-day pop-up book artists and their work. Seeing these artist’s amazing work serves as inspiration to think creatively about your own future projects, as well as a visual bibliography of pop-up books to seek out in your local library or bookstore. As a collector of pop-up books, it was reaffirming to see books from my own library represented and to feel that kindred spark of passion for the art. In other words, “We like the same pop-up books!” Hiebert’s book is a solid addition to the library of any beginner or intermediate paper engineer, and is a welcome complement to other pop-up book manuals, such as Carol Barton’s The Pocket Paper Engineer series or David Carter and James Diaz’s The Elements of Pop-Up.


Suzy Morgan is a 2009 graduate of the School of Information at the University of Texas at Austin, where she received a certificate in advanced studies in conservation from the Kilgarlin Center for the Preservation of the Historic Record. She has had internships at Northwestern University, Syracuse University, the Cincinnati Art Museum and the Ringling Museum of Art. After working as the web developer at the Newberry Library and working in private practice as a book conservator and preservation consultant, she is now Preservation Specialist for the Arizona State Library.She is also the creator of The Multi-lingual Bookbinding/Conservation Dictionary Project: The goal of this project is to combine, in one place, all the known bookbinding and book conservation terminology, in as many languages as possible.
Posted by Peter D. Verheyen at 10:55 AM No comments:

Insinuendo: Murder in the Museum 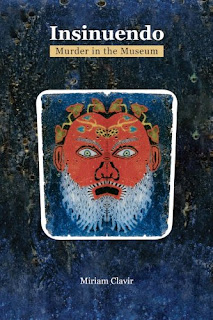 Dearest reader,
let me introduce this review by noting perhaps what is the biggest clue in the mysterious case of The Mystery Reader: I am not a reader of mysteries. Instead, I am a book conservator (among other things) who tends to stick to non-fiction and graphic novels.

In fact, I am certain that I read my very first Mystery (with a capital M, for officialness) just a few months ago. It was about a psychic who was an admitted fraud, but then who developed real psychic powers. I felt very smart for figuring out the identity of the murderer several chapters before All Was Revealed.

Insinuendo by Miriam Clavir, was my sophomore effort in the realm of Mystery Reading, and like many such efforts, I did not do quite so well at my second guessing-the-murderer attempt. I do believe this is also Miriam's sophomore effort at writing a novel as well, but I dare say she has made a much better go at it than my own feeble Gumshoe attempts.

The story takes place in the real Museum of Anthropology, part of the University of British Columbia. Our protagonist is Berenice "Berry" Cates, a 53-year old intern in the museum's conservation lab. New to the field, but not to personal hardships (such as a failed marriage as well as a failed internship), Berry finds herself thrust into an uncomfortable spotlight when a well-known antiquities dealer, Cuyler Foley, is found dead in the conservation lab and her boss, the head of the lab, is held for questioning by the Police. She starts examining, with methodical intent, the circumstances, potential motives, and possible suspects for the murder. The interpersonal politics, like the bronze statue of Pan that Cuyler was clutching when he died, turn out to be corroded in a very strange manner indeed. Many red herrings abound, and even when all is revealed at the end, the conclusion is not so much a package of loose ends neatly tied but a more realistic coda that leaves the reader to ponder: just who was the real murderer, after all?

At the beginning of the novel, Berry starts out as a self-effacing wimp who has to be reminded by her 15-years-her-junior boss that she can't just let the curators handle the artifacts any old way they want. In essence, she is still struggling to find her authority as a conservator, and I have to be honest, for the first 40 pages or so, I half-wished that she would turn out to be the murder victim just so I could be spared her whinging. However, as she is suddenly forced to take stock of the situation and avenge the reputation of the conservation department and her own highly-esteemed boss, she finally grows a spine, and becomes much more likable as a character. Her best moments are when she is completely out of her element, such as when she decides to tail one of the murder suspects in her car. She bumbles sometimes, but always in the right direction, and usually with a witty, self-deprecating internal monologue.

Museum (and library) politics can be be more heated than a Texan summer, and Clavir strikes it out of the park again for realism with her inclusion of bitter rivalries amongst departments as a plot device. The tension between curators and conservators is palpably taut. This is the part of a museum, much like the conservation lab (situated in the basement, another home run for accuracy), that most non-museum people never get to see. Because of it’s setting in a Native-art-focused museum, there’s also the added element of indigenous art politics thrown into the mix, which, as a former anthropology major, I found fascinating.

Most importantly, let me just say that this is the only novel I've read, thus far, that uses all the right vocabulary to describe the art and act of conservation. I've read several other novels featuring conservators-as-protagonists; some have been cringe-worthy, others acceptable (Robert Hellenga's The Sixteen Pleasures was my first foray into literary descriptions of the field). Given that the author is herself, a conservator, I'm not surprised about the accuracy of her portrayal of the profession. There's such a dearth of realistic portrayals of conservation and conservators in popular media that it's refreshing when an author uses "conservator" instead of "conservationist". Case in point, this quote by the protagonist herself, who mentally chafes when she is referred to as a "conservationist" by the police:


"What the hell? The "your conservationist" in question, me, Berry Cates - my lab stool was practically behind them, and they were talking as if I didn't exist..."That's conservator, by the way, not conservationist," I wanted to shout, "I have had specialized graduate training in the preservation of art and museum collections. Not trees."

All in all, I found “Insinuendo” to be a rewarding read, particularly since I didn’t have to mark up my copy with notes railing against the inaccuracy of the portrayal of my profession. It’s a compelling story, with a personable narrator, and an interesting setting that allows the reader to peek into the behind-the-scenes world of conservation, minus the rose-tinted glasses.


"The Mystery Reader," Suzy Morgan is a 2009 graduate of the School of Information at the University of Texas at Austin, where she received a certificate in advanced studies in conservation from the Kilgarlin Center for the Preservation of the Historic Record. She has had internships at Northwestern University, Syracuse University, the Cincinnati Art Museum and the Ringling Museum of Art. She is currently the web developer at the Newberry Library and continues to work in private practice as a book conservator and preservation consultant.
Posted by Peter D. Verheyen at 12:17 PM No comments: