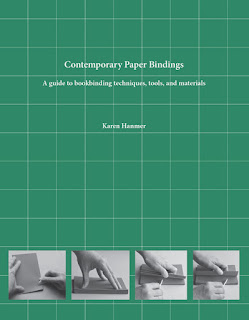 I’d been watching Karen Hanmer post images online for some time: a square carefully lined up to mark sewing stations on a spine, each step of tying a weaver’s knot, folding paper for yapp edges. When she eventually started posting images of a book cover, and then links to the self-published book, I realized what they were for. Contemporary Paper Bindings: A Guide to Bookbinding Techniques, Tools, and Materials (self-published through Lulu) goes through bookbinding fundamentals before giving step-by-step instructions for ten paper case bindings. Photographs and occasional diagrams throughout the book illustrate the text. The cover’s white-on-green grid references the ubiquitous green cutting mat.

The first sections (“Parts of a Book,” “Studio Essentials,” “Sewing Fundamentals”) explain everything to the novice, so that someone with enough motivation and hand skills but no experience at all could understand the basics. In fact, although the introduction bills the book as appropriate for all range of experiences, I’d say that it’s mainly aimed at this inexperienced bookbinder given the vocabulary and how much of it focuses on concepts like the names of parts of the book, how to use tools and set up a work station, and so on. There are some nice tips here, like flattening a thread with a folder to make it easier to pierce when locking the thread onto a needle, or the use of a thick catalogue as a makeshift support when piercing sewing stations in gatherings. 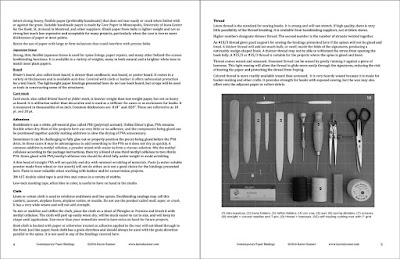 Instructions for the ten bindings follow, beginning about halfway through the book. A sentence or two of introduction and a few finished photos provide context that I wish was a little more detailed in terms of history and use. It would be nice to have more images here that show the full character of each binding, although some of the in-progress images in the instructions help construct a picture of what the book would look like. Instructions for the binding follow, with step-by-step text and photos to guide the binder through making the book; I would imagine this would be really helpful particularly to beginners and easier to understand in many cases than diagrams. 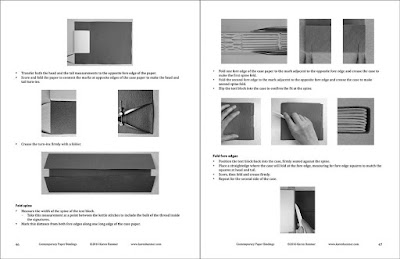 The structures themselves are mainly based on the idea of a multi-section textblock with limp covers made of heavyweight handmade paper, although there are variations such as paper over very thin boards, or thin paper wrappers around a thin volume. Some are more appropriate for decorative or artists’ books, while others could be useful as conservation structures.

The book would appear to be drawn from a compilation of workshop handouts, expanded and fleshed out to form a coherent and cohesive text. With this context the book makes more sense (the US letter paper size, Word-style formatting, credits on the bottom of every page) and I have to say, as class notes, they’re the most amazing I’ve ever seen. Assuming it to be a standard bookbinding manual written and designed as a complete book, however, might lead to some confusion, as it misses some of the polish one might expect in editing and photo quality—generally they’re a little dark and low on contrast, and there are typographical errors throughout. Long lines of text the entire width of the page are difficult to follow in general but particular in a scenario like this and could have been broken up into columns or otherwise made more easy on the eye. In terms of content, I think it’s great; my one quibble is with the vocabulary, which I wish followed a standard lexicon such as A Dictionary of Descriptive Terminology (Etherington & Roberts) or Ligatus’ Language of Bookbindings, particularly if beginners will use the book. Otherwise I find it a useful resource and would recommend it to my students.


Abigail Bainbridge is a book & paper conservator at Bainbridge Conservation in London. She is the conservation science lecturer for the MA Conservation program at Camberwell College of Arts and is Associate Tutor (Books) at West Dean College. She also teaches short courses at the London Center for Book Arts and Women's Studio Workshop (US). Abigail is a member of IADA and the treasurer of the Icon Book & Paper Group. She can be found online at http://www.bainbridgeconservation.com.
Posted by Peter D. Verheyen at 4:12 PM No comments: Links to this post 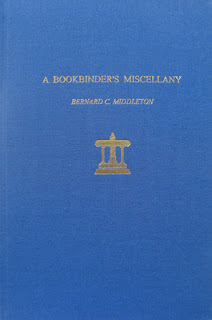 When A Bookbinder’s Miscellany by Bernard Middleton (Alan Isaac Rare Books: Oxford, England, 2015) came in the mail I was surprised to see that inside the little limited-edition blue cloth binding was a selection of articles that Middleton wrote between 1951 and 1976. I had assumed the “miscellany” in the title referred to a collection of recent reflections on his long and distinguished career as a bookbinder rather than a collection of articles mostly written in his mid-20s, just at the beginning.

One or two were familiar to me but for the most part these articles were new, and the overriding impression in reading the book is that of listening to a conversation that started without you. The themes are familiar—amateur vs. trade binders, English vs. French styles, the decline of skills and loss of the big bookbinding firms, worry over the future of the craft. But it’s quite interesting to hear them as they happened in the moment rather than, as I had assumed, in the form of present-day recollections. There’s no editing for hindsight nor, much to my delight, the youthful bravado and brashness of young Bernard compared to the unassuming politeness of present-day Bernard. I started writing down passages that made me laugh (from the page of the first article, on the subject of a badly-bound book: “If I had been so unwise as to exert myself in opening the book there is no doubt that I should have done it (or myself!) an injury…”) and in the end stopped because I was virtually copying down the whole book.

As I worked my way through the articles, fully intending to skim read but ending up lingering on each one, I kept an eye on the dates given at the beginning for when the article was first published. We were on 1951 for so long that I eventually went back to count up and saw that there were seven published that year – in Paper & Print and British Colonial Printer – and the pace doesn’t seem to slow in 1952; presumably there were others that didn’t make the cut for the book. Bernard was 27 then, and though they’re not generally very lengthy articles, one has the impression of a prolific early career in writing as well as bookbinding that set the stage for his later books, The Restoration of Leather Bindings (American Library Association: 1972), A History of English Craft Bookbinding Technique (Hafner: 1963), and Recollections: My Life in Bookbinding (Bird & Bull Press: 1995).

An introduction by Middleton and Alan Isaac gives an overview of the profession and the process of bookbinding, illustrated with a few pages of color photos taken by Isaac that do help illustrate the points despite sometimes unhelpful angles (eg. from the side when trying to show an unevenly rounded spine, so that the unevenness is not very apparent) and distracting backgrounds. The introduction was a helpful orientation to someone who hasn’t trained as a trade binder or has limited experience, although one would probably need to have a certain level of experience to get much out of this book as a base level of knowledge on the part of the reader is assumed. Some interesting changes in perspective are visible here; when describing squares 2015 Middleton indicates that “Taste has historically dictated the dimensions of the squares… they should be proportionate, neither excessively large or mincingly small,” (5) though 1954 Middleton cautions that “Small square are neat and impart an air of refinement, whereas large ones give the binding a heavy ledger-like appearance” (71).

The articles that follow are in no particular subject order but one can nevertheless group them into a few categories. There are, of course, notes on technique: “The Supported French Groove,” “The Art of Covering with Leather,” “Notes on the Hand Sewing of Books,” “Facsimile Printing.” These are practical but still filled with notes that help explain why things might be done a certain way, or that give context to the style of the times, often with a nod towards how things used to be done either in terms of fashion or to lament a loss of skill or market for such objects. There are quite a few that focus on the differences between binding in England and elsewhere: “Notes on Craft Bookbinding in Paris,” “Two Bookbinding Exhibitions: Abstract Motif in Irish Work,” “Book Review: American Bindings of the Finest Quality.” In these, and in parts of other articles, Middleton studiously compares technique, aesthetic, and practice, often to comedic effect as in this description of a French binder using their typical paring knife rather than a spokeshave to reduce a whole skin, “The girl I watched … was working on it when I arrived and was still prodding away at it when I left the bindery 20 minutes later. … [The spokeshave] has come into general use in England only during the last 30 years, or so, and there are still a few members of the old school who prefer French knives and look capable of slicing human skin if it is suggested that they are out-dated” (49).

In “Controversial Thoughts on the Decoration of Fine Binding” as well as throughout other articles, Middleton argues for book design to follow all other household objects in becoming sleek, smooth, and modern. I was interested to see him advocate for a smooth spine, because raised bands lead one to decorate in the old-fashioned styles. There is much lamenting throughout that those with the money to pay for fine bindings tend to be older, thus (understandably, he says) tend towards old-fashioned styles, and this combined with poor education in design leads to books made with little imagination. I would have quite liked to see images of his bindings from the time, compared to those he does not prefer, and I wonder what he thinks now about the ideal style for a binding.

Other articles give portraits of great names in bookbinding, such as Sydney Cockerell, Thomas Harrison, Roger Powell, and Arthur Johnson: “Fine Binding: A Craft and its Craftsmen,” and “He Was a Good Man and a Friend to All (Thomas Harrison)”. One name that appears quite a few times throughout with a lot of respect is William Matthews, who I knew only as the “Mr Matthews” who taught Maureen Duke, who in turn taught me. In the way that when I now teach, my students hear Maureen’s familiar refrains (“Give it a bit of lick!”), I heard Mr. Matthews’ through her, like stories of my parents’ grandparents that I never knew. An inevitable positive aspect to working in such a small field is the persistence of ghosts, the passing of not only knowledge from generation to generation, but of people.

The best way to experience this book must be to sit with it and Bernard at the same time, so that after every other sentence one could look up and pepper him with questions. One has the feeling, especially in the concluding piece written for the book by Bernard, that there are still so many stories there wasn’t room to print.


Abigail Bainbridge is a book & paper conservator. She is the conservation science lecturer for the MA in book & paper conservation program at Camberwell College of Arts (London) and is Associate Tutor in the book conservation department at West Dean College. She is also occasional short course tutor at the London Center for Book Arts and Women's Studio Workshop (US). Abigail is a member of ICON and the treasurer of its Book & Paper Group. She can be found online at http://www.bainbridgeconservation.com.
Posted by Peter D. Verheyen at 10:26 AM No comments: Links to this post