We are all very relieved that the Artists' Books Collection at the State Library of Queensland is safe and look forward to the its reopening.


The Studio West End (Wim de Vos and Adele Outteridge) is dry and back to business. The water came to the front gate of the old ice cream factory site where we are housed. Not so lucky were so many other residents and businesses in West End, CBD and suburbs of Brisbane. The devastation and heartbreak are hard to comprehend.

I was marooned at home with our street flooded in both directions from Moggill Creek. We had no power for five days so were spared the harrowing images that saturated all television channels. The water came into one lower room but not the main part of our house. We have a few wet books and some old stored stuff. We were very lucky compared with neighbours whose houses went under.

Below some photos I sent to Peter for the Bonefolder Extras blog.

Thanks to all who have sent messages of support.

The floods in Queensland, Australia, including its 3rd largest metropolitan area of Brisbane have caused incredible devastation throughout that region of the country. Queensland is home to some fine Bonefolder contributors including Doug Spowart, Christine Campbell, Adele Outerridge and Wim de Vos, and Linda Douglas. Fortunately they have been very lucky, but many, many others have fared very badly. Adele and Wim also just published [2/2/2011] a report entitled Flood photos and a personal account.

The Report below was received from Linda Douglas in Brisbane who lives on high ground:


Australia, the lucky country, has been inundated in several states, with torrential rain causing flooding never seen for more than a hundred years.  Homes have been inundated with water covering the roof of two story buildings!  At least 18 people have been drowned, ripped from their homes as an almost inland tsunami took their lives.  People scrambled into their ceilings when the water rose at sometimes incredible speed, preventing people from even being able to escape from their homes. And the rain just keeps coming.  More storms and rain are forecast indicating that those flooded will be flooded again.

The State Library of Qld, where the artist book collection is housed, did go under but the books were safe as they are not housed in the bottom floor.  There was time to move items in some houses where the Brisbane River floods were predicted, exacerbated by king tides. Noreen Graham of graham galleries + editions was not so lucky.  Her gallery  is situated beneath her house  and went under during the deluge.  Water up to the rafters meant that the gallery will require much renovation.  Fortunately, Noreen, with the help of others, was able to move the artists books in time, however, she did lose some of her own art works. [Note see also Robert Heathers report further down in this article.

Doug Spowart and Vicky Cooper live in  Toowoomba  where their work with photography, the environment and  artists books culminate in works of art and beauty, held in collections nationally and internationally. They had some frightening moments during the last month as the water rose dangerously close to their working area. At the rear of their property, there is a creek that occasionally flows.  The first photo, East Creek, Toowoomba, testifies to the extreme conditions as the water rushes along, taking trees and ground cover, and in the city of Toowoomba, cars, with it.  Vehicles were but toys as they piled up on top of each other.  A veritable avalanche of water sped through the city giving little warning.  People had to run for the highest spot to get out its way.  Ipswich, Grantham in the Lockyer Valley  and the south side of Brisbane were just some of the areas that were seriously affected with the devastation left after the floods  reminiscent of tornadoes or cyclones having ripped through the area, ripping every building to shreds, buckling railway lines and crippling industry. The filthy mud and stench is all that is left behind now that the water has subsided.  The most frightening part being no warning...just a tidal wave of red, dirty water taking everything in its path. We never thought our country would see such a spectacle. 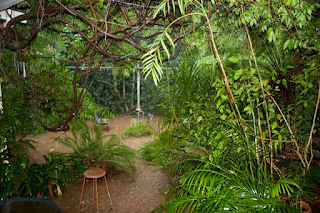 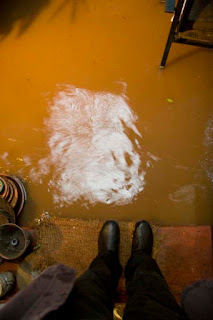 The second image is of the flooded back yard at Doug and Vicki's place and the third image is the water as it crept to just 8inches from the doorstep!  At what moment do you leave your property?  This was the question on everyone's mind as the water rose at unprecedented speeds.  Life for many was more important and they left all their belongings.

The city has been declared a crises zone with more than 26 000 homes in the Brisbane area alone affected.  7000 volunteers turned out to help those i need in the city of Brisbane.   The crises is not over yet  - there is more rain is to come.   The community has pulled together like never before.

Doug also has a video about salvaging photographs and other items from the Sandy Barrie Collection below.

Robert Heather has a report of Grahame Galleries (a noted regional book arts gallery) and the Brisbane floods on his blog at <http://artistbooks.ning.com/profiles/blogs/grahame-galleries-and-the>.  Below a picture of the State Library of Queensland from that blog. Fortunately most collections were able to be moved to safety, but the clean up and recovery will be immense.

Our thoughts are with them and their communities so that they may begin recovering soon. To donate to the flood relief appeal go to http://www.qld.gov.au/floods/donate.html.


See also our other report
Posted by Peter D. Verheyen at 4:52 PM No comments: