A Brief History of the Book by Steven K. Galbraith 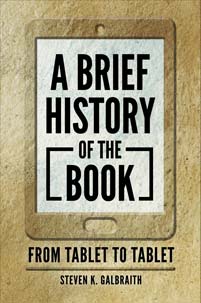 Steven Galbraith, Curator of the Melbert B. Cary, Jr. Graphic Arts Collection, has a new book. After various publications on particular holdings of the Rochester Institute of Technology’s Cary Graphic Arts Collection as well as his Rare Book Librarianship: An Introduction and Guide (together with Geoffrey D. Smith; Libraries Unlimited, 2012) he is now out with another introductory text. Reflecting the latest trends in book history, it is the ambitious agenda of Galbraith’s libellum to extend the field beyond the focus on the Western codex perceiving “the term ‘book’ […] in its most inclusive way, expanding its definition to a variety of technologies that present texts and images to readers” [p. xi] and all that in a short and accessible introduction/textbook format. “Five thousand years in one brief book? How is this possible? It is not” [xii] to quote the author himself. And yet the same dictum might still apply to much lengthier edited volumes on the topic such as Simon Eliot and Jonathan Rose’s A Companion to the History of the Book (Blackwell, 2009) or even Michael F. Suarez and H. H. Woudhuysen’s two volume edition The Oxford Companion to the Book  (Oxford University Press, 2010).

Named closely after the course he is teaching at the Rochester Institute of Technology, Galbraith’s A Brief History of the Book is drawing almost exclusively on the holdings of his home institution for its historic examples and is explicitly “written for courses in fields such as library science, English literature, and history” [xii]. It is an educational tool in the fullest sense featuring informational, recapitulation, and activity segments. One segment recurring in every chapter is what Galbraith calls “Modern Ads for Early Technology” which in their visual appearance recall the style and design of early magazine ads. Due to their fixed sub-categories, these ‘ads’ not only recapitulate the most important information covered in a chapter in a quick and digestible form (ad!) but also connect the four chapters of the book as common threads and  thereby “help in analyzing important themes, as well as similarities in technologies from ancient to modern” [p. xiii]. These sub-categories are called memory (information storage capacity), readable/writable (writing properties of the medium), recyclability and durability (of the material), security (of the encoded information), access (how information can be accessed) and costs (of the book technology). The book’s four chapters are titled “The Ancient World,” “Early Printing and Medieval Manuscripts,” “Printing with Movable Type,” and “Digital Books.”

“The Ancient World” covers the major text media used in ancient Mesopotamia and all around the ancient Mediterranean before the rise of the parchment codex while also paying a short tribute to the palm leaf manuscript traditions of Southeast Asia. The reader is introduced to the writing techniques and various properties of the clay tablet, of the papyrus and leather scroll as well as of the wax tablet, properties, as Galbraith can show, that will have a come back in later centuries or millennia in other types of text media. Random (clay tablet, wax tablet) vs. linear access (scroll) is one of the great themes running through the entire book, as is the mutual impact of user and medium: “On the one hand, part of this evolution is owed to humans adapting the technology. On the other hand, part is owed to humans adapting to the technology” [p. 3]. One of his earliest examples of such a mutual impact is that of the evolution of cuneiform script from linear to ever more wedged and abstract shapes as a direct response to the writing properties of a stylus on clay, which he demonstrates with the case of the symbol for barley. In the framework of his thoughtful didactic design Galbraith will use this example again in Activity 1 of the first chapter in which students are asked to form their own writing tablets from clay and reproduce the evolution of that symbol hands-on, a form of experiential learning that repeats important information covered earlier in the chapter and will leave, I am sure, a lasting impression (pun fully intended!) with the students. It is this hands-on and special collections-supported textbook approach that clearly distinguishes Galbraith’s take from traditional introductions to the history of the book.

The title of the second chapter, may cause some initial confusion in the chronological mindset of the western reader who will soon discover, however, that this chapter does not start with Gutenberg in some sort of chronological inversion but rather with the true firsts of this technique – the woodblock printers of China. We will also learn about China’s invention of paper in the early 2nd century CE, about the first truly mass-produced book, the Buddhist Hyakumanto Darani produced c. 770 CE in Japan, and much more.

Before diving into the production of medieval manuscripts, Galbraith spends some time on the transition from the scroll (the dominant text medium of Egypt and Classical Antiquity) to the codex (the dominant format from the 4th to the 20th century in the West) stressing the latter’s greater capacity and practicability over the former. The comparison of this transition to that from the linear access of the VHS to the random one of CD and DVD [p. 42] is another great example how Galbraith manages to ‘translate’ his rather unfamiliar subject matter for a modern student audience.

The great majority of “Early Printing and Medieval Manuscripts” is then devoted to the European medieval manuscript tradition providing a clearly written introduction to most aspects of this book format. It provides a great overview of the whole production process from parchment production to illumination, from writing styles to medieval binding techniques and from palimpsests and other forms of parchment recycling, to the evolution of book storage.

Chapter three covers “Printing with Movable Type” from its earliest beginnings (again not in Europe but in 11th century China and later in Korea!) all the way up to modern phototypesetting – though it pays its due respect to Gutenberg and the Incunabula Period as a whole. It is again remarkable how Galbraith manages to squeeze into a few pages a plethora of information amply illustrated with images of historic typefounding equipment and modern depictions of historic printing and papermaking workshops. Besides typefounding, the chapter also covers the process of papermaking, book formats, bindings and provenance as well as developments in storage.

The last part of the chapter focuses on the book in the industrial age, covering developments such as the transition from the wooden hand press to the iron press and from there to mechanized printing presses as well as the transition from laid paper to wove paper (both made from linen rags) and then ultimately to industrially produced wood pulp paper. An overview of the advances in typesetting (Stereotype, Linotype, Monotype, Phototype), the Fine Press Movement (as part of the Arts and Crafts Movement’s reaction to industrial production), and the rise of the typewriter are closing out Galbraith’s third chapter.

Making good on the second part of its title, From Tablet to Tablet, Galbraith’s Brief History of the Book devotes its last chapter to “Digital Books.” Galbraith can show how in the same way as early printed books continued certain features of their manuscript predecessors, so, too, did digital devices with respect to the printed book, with other forms of digital reading and writing exhibiting features of even older ancestors: Early websites were literally a page “and resembled a [clay] tablet or perhaps a parchment or paper leaf” [p. 136] before the reader was able to ‘scroll’ through them. The e-book flipped virtual pages just like a physical codex and apart from its general handheld book-like shape, users are even given the option to purchase a leather cover to round out the book feel. In order to tell this (for now) last chapter of the book’s history, the author takes the necessary detour through the rise of the computer and the short life of the PDA (personal digital assistant) such as the Apple Newton MessagePad or the Palm Pilot (operated with a ‘pen’ functioning as a digital stylus!) all of which were put to use in ways that were later absorbed by tablets and smartphones tapping also into the seemingly endless information storage and access possibilities of the World Wide Web. Hypertext as well as augmented and virtual reality are now beginning to write a new chapter of the history of the book, according to Galbraith, pushing its capabilities and information access realities beyond those of the book’s traditional formats.

To sum up: Steven Galbraith’s is a concise, insightful, and well written introduction to the millennia-old evolution of mankind’s ways to store and access textual information. Written by a special collections curator, it makes extensive use of the primary sources at his disposal from highlights in the Cary collections to contemporary texts which he analyses and from which he distills the information relevant for his book history. A second edition could benefit, however, from more consistency in the shortened footnotes which appear sometimes as ‘last name author, shortened title, page number’ and sometimes just as ‘author, page number’ (e.g. chapter 1, fn. 40 “Roemer, 86” vs. fn. 48 “Roemer, ‘Papyrus Roll,’ 86” or fn. 46 “Bülow-Jacobsen, ‘Writing Materials,’ 3” vs. fn. 66 “Bülow-Jacobsen, 12” et passim). I would also like to note that sillyboi (title label on a papyrus scroll) is a masculine plural which is why p. 23 should probably read “Hanging from the ends of the roll is a sillybos…” (or a sillybon if one were to use the better attested neuter form). These minutiae should not distract us, however, from Galbraith’s achievement of having written a book that can be put to great instructional use in all kinds of humanities and special collections settings. I, for my part, intend to assign A Brief History of the Book: From Tablet to Tablet as the required textbook for my upcoming one-week intensive book history class.


Sebastian Modrow is Curator of Rare Books and Manuscripts in the Special Collections Research Center at Syracuse University Libraries. He received his Masters level degree in Latin and History from the University of Greifswald (Germany), a doctorate in Ancient History from the University of Rostock, and a Master of Library and Information Science from Syracuse University. His main focus is on primary source teaching as well as on collection development. In the last few years he published in book and article length on ancient and indigenous collective memory matters as well as on ancient record keeping. His current research focuses on the history of classical libraries and archives. In addition to frequent presentations to classes coming to the Special Collections Research center, he also teaches "The History of Libraries and Archives in the Western World" at Syracuse University's iSchool. He also teaches "Introduction to Cultural Heritage Preservation" in the Museum Studies Program.
Posted by Peter D. Verheyen at 9:48 AM No comments: