The Bindings of Trevor Jones 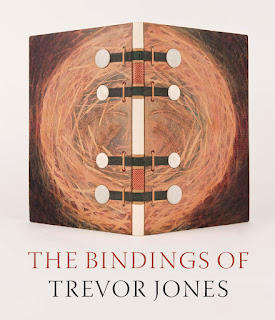 “I consistently design beyond what I know I am capable of doing, and have to discover or invent the means as I go along.” – Trevor Jones (1931-2012)

The Bindings of Trevor Jones catalogs over 140 works by this eclectic bookbinder who sought experimentation with materials and a connection with fine art in his designs. In this impressive collection spanning nearly fifty years, his legacy in the history of bookbinding is made more than apparent. As one of the founding members of Designer Bookbinders, he and his colleagues helped revive the art and craft of bookbinding in Britain during the second half of the 20th century. The images in the catalog are supplemented by detailed sketches and notes from the binder, as well as articles he wrote in the 1980s and 90s that are as informative and enlightening today as they undoubtedly were then.


The full color images of the bindings are arranged in chronological order, from Jones' first experiments as a student to the fully formed, complex and expertly executed designs of later years. His early work was influenced by his first binding instructor, Arthur Johnson, who displayed a modern design aesthetic that echoed the fine art of the middle of the 20th century. Jones' early bindings, in their asymmetrical compositions, amorphous color onlays and fluid black tooled lines, call to mind the bindings of Johnson and Edgar Mansfield, as well as painters like Miro and Picasso. At that time and in the years to come, Jones was inspired by the work of his peers and teachers rather than the purely decorative or overly restrained bindings of the past.

This forward looking approach to binding led to a great sense of experimentation. The catalog contains an informative essay on the use of spirit dyes, which is one of the many inventive techniques Jones utilized in his work. The freedom which the use of these dyes gave him was essential to his artistic development and allowed him to incorporate his training as an illustrator into his bindings. Jones often used the cover of a book as a painter would a canvas, filling it completely with pictorial, painterly representations, frequently of the human form. In his design of James Joyce's Pomes Penyeach, the binder made an innovative structural decision based on the need to have a long horizontal surface on which to depict a reclining nude. He doubled the amount of board surface by hinging another board to both the front and back covers. These inner covers are hidden when the book is fully closed, revealing only a portion of the female nude figure on the exterior. He used this cover structure many times throughout his work to increase the surface area on which to construct a design while simultaneously creating a cinematic effect of a long horizontal image fully revealed only through manipulation by a reader/viewer.


During the 1970s, many binders responded to new movements in visual art and architecture that exposed the function of an object and incorporated it into its design. During the same time period, the massive flooding of libraries in Italy brought to light many examples of historical binding structures which complimented the new functionalist art movements. Jones took note of these developments and made use of the sewing support as a design element in several of his best bindings. Dark cords and lacings snake across covers showing themselves in unexpected places. In the description for his binding of Edgar Mansfield's 11.2.80 On Creation he reveals that he used a method of chance to determine the composition of the cover, lifting the long cords up and letting them drop repeatedly, tracing the results. This method of discovery and openness to process is indicative of much of his work. The design for this same binding continues on the inside of the covers where the laces from the exterior appear again, embedded in the doublures of grey goatskin, having emerged through eyelet holes or wrapped around edges.


One of Jones' most ambitious projects is his first binding of George Orwell's Nineteen Eighty-Four. The structure of the book and its casing is artfully complex and captures the ominous mood of the text. The binder uses old leather gloves to create onlays in dark browns and reds, cutting and spreading single gloves out to construct seemingly monstrous hands that appear to be reaching, flailing, or grasping. Three sewing tapes are exposed on the spine and ten dark leather thongs trail across the front and back covers, gathering at each corner and spilling over the covers as loose ties. The closed book sits in the chest area of a large straight-jacketed, simplified human form sewn from canvas in muted colors. The human form wraps around the book, snapping closed, revealing the roughly stenciled title of the book. The whole is contained in a hinged, wooden box. Every detail of this work, including the custom paste paper flyleaves, evokes a powerful and haunting image of the human soul, psychologically bound and oppressed.

In Nineteen Eighty-Four and other work, Jones incorporated found materials in his designs, such as leather gloves, scraps of clothing, fur, handbags, wallets, and lacings. The found materials seem to share a connection to the human body, with the marks of time and use celebrated and highlighted by the binder. Jones also integrated into his designs the raw edges of the animal skins he worked with and would reinforce the grain of the leather and purposefully pucker and manipulate the skins, creating texture and dimension.

Jones had a deep connection with much of the work he chose to bind. He states in one of the catalog's essays that “[E]ven when I am binding a book for someone else I am at the time making it for myself.” The texts he worked with have a distinctly modern character, including those by James Joyce (of which there are many examples), George Mackay Brown, George Orwell, Arthur Miller, and David Jones. For the binding of Arthur Miller's, Death of a Salesman, Jones used onlays, inlays, cracquelle work, and stenciled spirit dyes to create two gripping, large scale self-portraits on front and back covers. The perspective and scale of the faces allow the viewer to connect with the deeply flawed everyman at the center of Miller's story. The tone and color of the portraits is dark and beautiful, ranging from a warm honeyed brown, like an aged photograph, where the cracks and fissures of the cracquelle work are most apparent, to the deep complimentary blue and purple-blacks. These are not just book covers, they are compelling paintings as well.

Trevor Jones created deeply personal work, unique in the history of bookbinding. The craftsmanship and art-making on display in this collection is informative and inspiring for anyone interested in the art of design binding, while the essays and historical context for the work advance and enrich the field of bookbinding on an international scale.

An excerpt from the introduction can be read on Oak Knoll Books' site.


Amy Borezo Amy is an artist, bookbinder, and the proprietor of Shelter Bookworks, a bookbinding studio in Western Massachusetts.
Posted by Peter D. Verheyen at 5:24 PM No comments:


The 2015 Bind-O-Rama is devoted to the subject of BLOOKS, objects made in the emulation of books. This is an opportunity for blook artists of ALL creeds (binders, printer, papermakers, decorated paper makers, …) to apply your creative energy and bookbinding talents to making a book object that examines and expresses your relationship with the book. Around the world, for hundreds of years, people have been making book-objects that reflect their devotion and respect for books and for each other. There are countless examples; they include bars, cameras, radios, banks, toys, memorials, food tins, desk accessories, book safes and boxes, vases, musical instruments, magic tricks, furniture, jewelry and artworks. Blooks embody the same characteristics as books and many take the form of specific titles and book formats. They signify knowledge, education, taste, power, wealth and more. They have been treasured and passed down through the generations, and many thousands reside in private homes, public and private businesses and in museums and libraries around the world. Blooks have been used to celebrate and memorialize important occasions and personal losses and successes. They serve as reminders of memorable visits to important places, as receptacles to hold valuable and practical objects and are the source of great amusement. Start making your heirloom now and let your imagination run wild!

If you are interested in participating in the Bind-o-rama but need some inspiration or challenge for an idea, or want to base your design on an historical object, contact Mindell Dubansky  or see her blog About Blooks

The exhibition Blooks: The Art of Books That Aren't  (book objects from the collection of Mindell Dubansky) will be on view at the Grolier Club in New York City from January 28-March 12, 2016. A full-color, 9 x 11 inches, 96 page, paperback catalog will be available. For a limited time, Mindell is taking orders for unbound copies for hand binders. The price is $45 plus shipping, pre-payment is required for books in sheets. If you are interested the exhibition, it's programs, reserving an unbound copy or pre-ordering a bound copy, contact Mindell and visit the Grolier Club website later this year.
Posted by Peter D. Verheyen at 9:00 AM No comments: