The Concave Spine and Bill Anthony

In 1971, Bill Anthony and I produced an experimental binding with a reverse-round, now known as the "concave spine". Our example of this interesting binding structure had been lost for many years following Bill's untimely death in 1989. The book was recently found and is again part of the Univ. of Iowa's important collection of bookbinding models (see below). Gary Frost, conservator emeritus pointed out this special binding during my recent visit to the campus.

The reverse round / concave spine binding was made in 1971 shortly after Bill had seen the famous BOOK OF KELLS during his trip back home. Bill described how that important Irish manuscript had been rebound by Roger Powell and that when the book is being exhibited at Trinity College Dublin, the spine is supported with a wooden dowel. I recall that Bill and I discussed "why do we bind books with a convex spine, when the structure will undoubtedly reverse to a concave spine when opened". To help answer that question, we bound a book with a reverse-round.

I was glad to see that binding again after all these years. One can easily understand that there is no movement of the spine, yet the pages open freely. In recent years other binders have experimented with this unique idea, the concave spine.

Historical Models at the University of Iowa: While Bill was the book conservator at the University of Iowa in the 1980's, he and his students produced numerous examples of early bindings as well as a few experimental bindings. Over the years more bindings have been added to this important collection. Pictures of those bindings are available at the following website: http://digital.lib.uiowa.edu/binding/index.php

"Treatment Report" -- sheet from 1971 detailing the "Reverse (Concave) Spine" binding: note that contact cement was used to secure vellum to the sides of the covers. 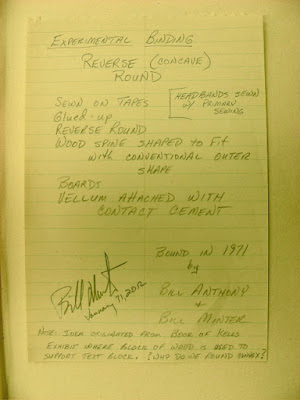 Two pieces of wood were used to make the "normal" spine. 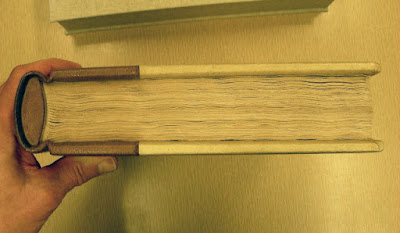 Opening with minimal strain, actually no strain, to the binding structure. 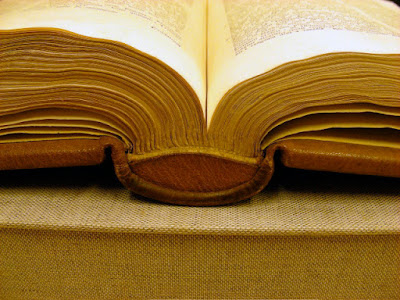 Bookbinding Colleagues,
A few weeks ago, I shared some information about an unusual, reverse-round binding that had been lost and was recently found. Upon looking in my files, I found some further details that may be of interest, especially regarding the swelling from the sewing:

Binding a Book with a Reverse-Round, aka Concave Spine

In the early 1970s, during my apprenticeship with Bill Anthony, he was telling me about the BOOK OF KELLS, an 8th century Irish manuscript that he had seen during a visit to his homeland. Roger Powell had restored that great Irish national treasure in the 1950s. When this book is exhibited to show the magnificent illuminations, a wooden dowel is inserted under the spine to support the sewing. Bill went on to describe the stress that a binding encounters as a book is opened and how the spine moves from a convex shape to the concave. Then there was the inevitable question:   "Why do we force a book to do that?" He further explained the swelling that is created by the sewing thread, and how we, obviously, manage that swelling by rounding a book with the convex shape. We wondered what would happen if the book were bound with the concave-shape "built-in". Obviously, the concave shape is readily seen on many well-used, flat-spine books, such as thick telephone books.

In order to learn more, we prepared an old discarded textblock by sewing it on linen tapes. After gluing up the spine, we reversed the round to accommodate the swelling, thus producing a concave spine. Since we were thinking that the book should look "normal", we prepared a piece of wood --- #1 pine (without knots) from the local carpenter, as I recall -- to fit the concave shape; the linen tapes were then wrapped around the wood. Then another piece of wood was shaped for a normal spine, but this wood was wider to allow a normal shoulder to accommodate the boards. The binding was quarter-leather with vellum sides --- note here we experimented further by attaching the vellum with contact cement which is certainly not a standard bookbinder's adhesive. The true beauty of the binding was obvious upon opening. The book functioned magnificently with no stress or strain while the pages opened fairly flat and the gutter margin was easily viewed. The binding verged on being absolutely perfect and a dream to behold.

Sadly, Bill died on February 8, 1989. This one and only "reverse-round" binding was then thought to be lost because it was not in Bill's binding collection. Only recently was the book found and it is again part of Bill's collection of historic binding structures now available at the University of Iowa. These and many more historic bindings can be viewed at the University of Iowa website:   http://digital.lib.uiowa.edu/binding/index.php

As we know, James Brockman has furthered the development of this interesting and unique structure --- a brief description is available at    http://www.hewit.com/skin_deep/?volume=2&article=1#article. The concave spine binding is a structure that deserves further investigation for that special book or perhaps for all books, if that were possible.

Bill Minter
Posted by Peter D. Verheyen at 10:49 AM No comments:

A Conversation about the Bonefolder hosted by Miriam Schaer

Click here for more about Bookbinding Now.
Posted by Peter D. Verheyen at 7:41 AM No comments: